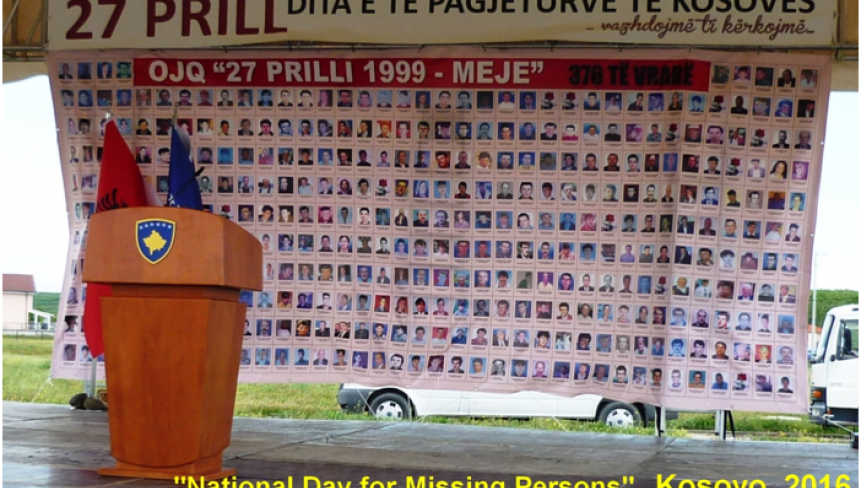 The war of the end of the last century has seen many crimes at a large and structured scale in Kosovo and had diverse and numerous consequences for Kosovars. The worst destructions were committed against the population, especially in 1998 and 1999, when crimes against humanity were committed. No difference was made towards the age and the sex of the victims. Serbian crimes affected the population of urban and rural areas and were directed and concentrated on the unprotected Kosovar-Albanian population. The state of Serbian was responsible for all those crimes. During the war and especially during the year 1999, unarmed civilians were slaughtered, mass rapes were committed against Albanian women from Kosovo and a large amount of the population was deported outside of the territory of Kosovo.

A real organization of those crimes took place in order to reach the military objectives of the armed forces. In this context was created the category of “missing persons”, meaning that the traces of the crimes were in fact deleted. Key features of those crimes are related to the hiding of the traces of the crimes and the loss of the identity of the victims. Unfortunately, 17 years after the war, as well as in many countries of the world, Kosovars are still burdened by the enforced disappearances caused by criminal and powerful government.

In Kosovo, the plaints toward enforced disappearances have to be directed to the local institutions by the families. The problem is that they are not aware of their role to inform the international institutions about it. At the national level, 1966 persons are still considered as enforced disappeared persons, and in the municipality of Suharekë, where the Association “Shpresimi” acts, the families of the missing persons are still looking for 121 persons.

The activities of the family associations of missing persons rely on international conventions on human rights and seek to know the fate of their loved ones. But the results of the identification and localization of the burial sites have not satisfied the families. Through organizing memorials on official dates and the creation of tables of the missing persons was increased the pressure on the Serbian state when the archives of the army and police were opened. Those sources contain all the information about the location of the 1966 persons who are still considered as missing.

Working talks group between Pristina and Belgrade under the facilitation of the ICRC on the issue of the fate of missing persons took place, but the reluctances of the Serbian side undermined the talks. Therefore, relatives of the missing persons require that the question of the fate of missing persons should reach Brussels. This would increase the confidence of the families in the Kosovar Government about this issue and enhance the pressure on Serbia to reveal the location of mass graves in its territory and in Kosovo.

With the decision of the Kosovar Parliament, the 27th of April is scheduled as the National Day of enforced disappearances. This year, it has been organized in the village of Meja, where atrocities against 377 persons Kosovo Albanian civilians by Serbian military and police forces were committed during the war of 1999. On this remarkable day of sorrow, communities and people gathered from all Kosovo to participate in the commemorative ceremony for all the individuals killed or disappeared during the war in Kosovo. At this meeting attended also state and political structures of Kosovo and international institutions and organizations accredited in the country.

The President of the Republic of Kosovo, Mr. Hashim Thaci, in his speech delivered during this event, promised to make a maximum of efforts as soon as possible to enlighten the fate of enforced disappearances through the activation of all the mechanisms and institutions that deal with the fate of missing persons and requested that this matter should be given the priority in the talks with Serbia in Brussels.

Then, the Chairman of the Government Commission for Missing Persons, spoke about the activities at the country level which are taking place to found those disappeared persons. Excavation of the areas in territory of Serbia, near Novi Pazar in Kozarevo and Krizhevak near Raska met some difficulties due to technical obstacles as well as others caused by the Serbian institutions. Furthermore, the Coordinator of the Coordination Council of the Association of families of missing persons of the Association "April 27", Mr. Haki Sadriu, on behalf of the families, asked all local and international organizations related to human rights to engage themselves further on the issue of enforced disappearances and to enlighten the fate of the missing persons as soon as possible, because the suffering of family members are huge and their patience is at end. So far, we had promises that it will be done a lot to dicover the fate of enforced disappeared persons, but the actions and results that families received about their loved ones were too small. 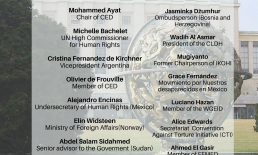 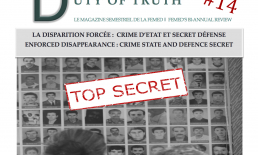